My family has unwittingly joined a horde of Seriously Unhappy Consumers of RCA televisions and other products.

As a user experience evanglist who often extends her reach into customer service departments and processes, I find myself wondering… just where IS the fine line between poor, inept, inadequate customer service, and intentional theft by a large corporation who has brand equity (though apparently, not the reputation to back it up any longer.) 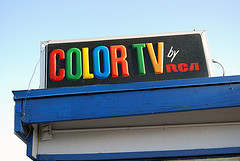 Remember the good ‘ole days (before I was born, even), when families gathered round the TV and watched a world they’d never before seen unfold in front of them? The RCA brand was at the forefront of color television technology, and started demonstrating capability for color with NBC as early as 1940. Wired actually named the RCA TV from 1954 as “The Greatest Gadget of All Time.” When Walt Disney’s Wonderful World of Color became popular in 1961, so did requests for color televisions. This is the RCA a lot of people, who grew up as television technology advanced, remember. The moniker “RCA” used to denote a compelling brand that meant quality, value, and ownership by modern consumers who embraced new and exciting technologies. (Photo by Roadside Pictures)

Nearly 50 years later, the brand, the company and the quality have all changed. The RCA brand is owned by Thomson SA and the rights, licenses and lines of ownership and responsibilites are a blur of changing hands over the last decade. I don’t know if parts are made of cheaper quality stuff than they used to be, but the website promoting RCA is pretty and professional enough.

Our Bad Experience with RCA
Here’s what happened to us, and why I am pondering this company’s history and customer service commitment… we purchased a large screen RCA HDTV from Walmart in Ottawa, Kansas on December 30, 2007. We love this TV – it was just 1000.00, but has a nice matte screen, and we have a Wii now and have had so much fun playing with it on the nice big screen. In early July, I turned it on one Saturday morning, having just watched it in action the night before, and it wouldn’t show the picture. Eventually, the picture came off and on, and kept doing that to the point where we realized this TV was not usable in its current state. Hmm… and it’s barely half a year old? (To us, at least.)

We gather up the paperwork and I had kept the receipt, so my husband starts calling the number for Thomson. They explicity tell you in the paperwork NOT to contact the store you purchased it from, but to contact them. (If you are reading this, and lucky enough to still have time to return it as a refund, take yours back now and say a little prayer of thanks!) He also spoke to our local TV repairman, and searched online and at Ebay/Craiglist for parts, and he did found a single lamp kit for sale for 260.00.

He waits on hold through various phone calls with customer service, because this thing has a 1 year warranty, and speaks to someone he can barely understand (the connection was so bad, I have to wonder if the support center is in China or very distant to us.) She says that she will send a shipping label to his email address, and to expect in either 4-8 hours, 48 hours, or 4-8 days. (That horrible connection!) At any rate, all of those have passed, and we still have no email. The shipping label is to send the lamp back, at which point the story is that they will send us a replacement that I guess we are responsible for installing.

I have also spoken to someone at Walmart, who says there is nothing they can do, and she expressed surprise that we could even locate a phone number for Thomson. She also recommended we buy a Phillips next time. 😐

Our Bad Experience with RCA is Far from Unique!
Sounds okay so far, right? Well… many people have been told this same story. In fact, I have saved a bunch of links of sites with names like “pissed consumer”, “complaints”, “ripoff report”, and “my three cents” all of which have multiple complaints from RCA buyers who have sad stories of their own to tell, some of them exactly like ours. Not exactly reassuring. Our lamp issue is fairly common, as is the TV turning itself off and on in some demonic-like state of possession, which would certainly be annoying. Several people online claimed RCA/Thomson customer service representatives and managers said that their TV would be picked up, and a refund check delivered within 6-8 weeks. I did not see saw an update to these complaints that confirmed a refund check had arrived.

So… I am not an expert on product laws and consumer satisfaction rights, and this post only intends to pose the question about a company’s legal responsibility regarding electronic devices and equipment. We all hear about cases of fraud that are obvious, such as the Enron fiasco, but can a company make and sell products, that last just long enough to hopefully make it out of warranty before failing, and still be allowed to exist as a company? Or could this be some form of theft that somehow goes unpunished? When someone pays upwards of a hundred or a thousand dollars for something that works for a few months, but in case after case it fails and the company does NOT make good on warranty promises, why is that called “bad customer service” and not grand larceny?

One of the complaint web sites has a tagline that says something like “customers in control”. But a volume of complaints online, for all the world to see, some with such heated vocabulary that as they write and start typing in all caps, you can picture the steam poring from their heads, has not yet done a thing for many of these consumers. Some have spent less than a hundred, some less than a thousand, and some have spent thousands on RCA products that may only work a few months to a few years. Is this the new expectation of electronics? Or is this the hallmark of a company who legally should have to make better products or stop selling them to people? Are there laws governing the length of time a tangible product has to work?

This post will be updated, for the morbidly curious, as events happen in our attempt to either fix this television or obtain a refund. If you’ve had experiences, good or bad, with RCA products or the Thomson company, I’d love to read your comments, so please leave one.

>> To read comments from other RCA buyers, go to my Delicious links on RCA

August 4, 2008
Today I called the customer service center and waited on hold forever before finally hanging up, and submitted a request via the RCA Contact Form, which states: “We’re always in the mood to talk RCA Television. As far as we’re concerned, it’s the most important thing in the world. After our customers, that is.” We’ll see.

August 4, 2008
My husband had received the shipping label in his email this morning. Now he has to remove the lamp kit from our TV and send it back to them. It would be nice if they had sent some instructions. Fortunately for us, hubby is excellent at figuring out how things work, so he’ll manage just fine.

August 7, 2008
Fedex picked up the bulb to deliver it back to RCA. Unfortunately, they didn’t leave a tracking number so I can only hope it has arrived and we will get a new one back to replace it. I am tired of this giant TV sitting behind my couch! (And I miss playing with the Wii.)

UPDATE: August 29, 2008
Fedex delivered the bulb and The Oilman happened to be here and he fixed the TV immediately. Yay!!! We have our giant TV back. I hope this bulb will last a lot longer than the first one.

For now, this issue has been resolved.