This post is primarily meant for Etsy sellers. (We are one now too!) There are currently 273,270 active Etsy sellers, people signing up as members at a rate of over 300,000 per month, and in November 2010 Etsy broke a sales record of over 2 million items sold in one month. So how can sellers expand their reach, have more fun selling and increase their sales potential? By adding some other social networks to their mix of daily activities! 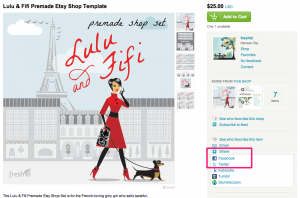 We are going to be making and selling themes and templates in support of Etsy sellers and have just begun stocking our store. The set Lulu & Fifi has only had 77 views since I put it up, so I just tweeted about it to let people know it’s there, using the handy “Share” button on my page. If I used Twitter simply to promote my Etsy wares, it wouldn’t work as well. It is because I am actually friends with people and do a lot of reciprocal sharing and communicating, that anyone will care to click on my link. In a few minutes time, my views have gone from 77 to 111, just while writing this paragraph. That’s the power of using Twitter in conjunction with Etsy (and why it’s important to build social networks with like-minded folks who you enjoy interacting with.)

Another important use of Twitter is for customer service – it’s easy to chat back and forth via DM or using your public stream, with an interested prospect or buyer. Showing people you’re around and active during buying times, plus seeing your interactions with others is another way to demonstrate they can trust you to provide quality service and merchandise.

Here’s the tweet I sent – note how the latest version of Twitter shows the full graphic if you look at the tweet by itself… awesome! If you don’t have a Twitter account you can get one here. Be sure to match your background and colors to your store for the greatest brand effectiveness. 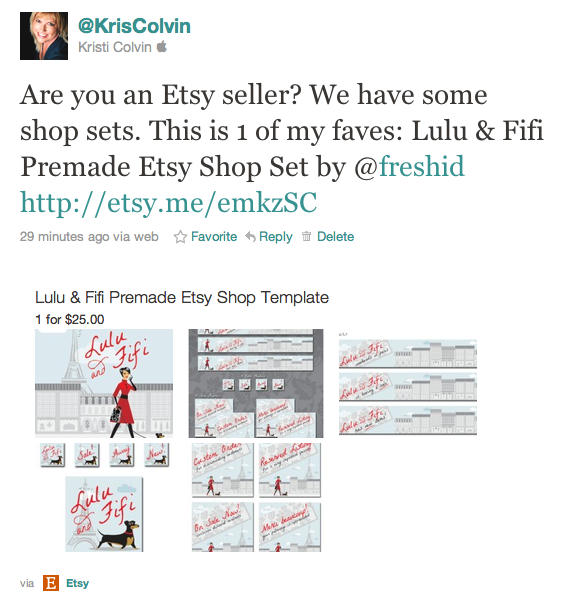 I also have a Tumblr for my personal blog, which I dearly love because I follow a lot of cool, fun people who post interesting things, that I can “reblog” in a matter of seconds. Things I love, I reblog, so I can reference them later. So think about what’s on Etsy for a moment… TONS of adorably quirky, fun, neat things. Things that people on Tumblr who like to share and play, might find interesting enough to pass along to their friends. The moral of this point? Set up a Tumblr and make friends there! I would use it, if you have no other website, as the companion site or blog for my Etsy store. Seeing handmade stuff on Etsy is very cool, but sometimes hearing the backstory of how something creative came to be, is even cooler and draws people who are intrigued by it toward purchasing. Plus, blogging your thoughts and letting people know who you are as a person (the same goes for tweeting) breeds familiarity, and familiarity breeds trust, and trust is a cornerstone of selling. So there is benefit in being accessible and approachable as a businessperson, and not just the Wizard behind the curtain (the curtain being the graphic avatar of your store.) 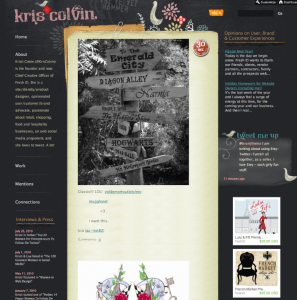 Another benefit of Tumblr is that with some custom coding, you can add the Etsy mini widgets to your sidebar or the top or bottom of your site. You can also put one on Facebook, like we did on our Fresh ID business page. I have not put the Etsy widgets on my Tumblr yet, because I’m trying to decide whether we’re going to create a new one for the Themes & Templates we are going to sell or not, but the graphic here shows how it might look. Selling on Etsy is obviously not our core business – we are a creative services and social media agency -but if it’s yours you shouldn’t hesitate to put that on your Tumblr so that everytime people visit it, they will see the latest stuff you’re offering in your store. You can also set it up so that when you Tumble something, it goes into your Twitter feed, and if you post something you’re offering on Etsy as a story on Tumblr, that will automatically get sent to Twitter. You can get a free Tumblr account here.

You will need to find a Tumblr theme, buy one or have a custom theme made for your site, so try to get one that coordinates with your store branding. We do custom-designed themes with lots of social network-integrated coding that run around $1000. We are going to eventually offer a Tumblr theme just for Etsy sellers that will be much less (under $100), and will be built to quickly brand it like your store and insert your Etsy Mini listings. If you want to know more about that theme just contact us… it’s not out of production yet. We also intend to do some Tumblr themes that will match the shop templates in our Etsy store.

Tumblr, just like Twitter, involves reciprocal friendship for maximum effectiveness. I use my Tumblr for a highly personal site (as opposed to this blog, for our business) so I can reblog, write down, and share anything that amuses, delights or annoys me. So it is a total mix of goofy pictures, designer-inspired home decor and illustrations, funny, raunchy things, thoughtful musings, tirades against injustice and self-promotional blather. In other words, it’s the sum of my parts. If you want to keep your Tumblr more business-like though, you will be in plenty of good company. Everyone from major publications like Newsweek to hugely popular web applications like Twitter and Foursquare are making use of Tumblr for their business.

When I began writing this post I had 77 views of my Lulu & Fifi Shop Theme, and I now have 160 views, a retweet of the link and a question from someone about our shop sets. Not bad for taking the time to send a single tweet to let my friends know what I’m doing!

Do you have any questions or success stories to share about using other social networks to promote your Etsy wares? Would love to hear them. Ebay is doing something kind of unique – they have a new “social media sellers” program they’re initiating. If there is enough interest from Etsy sellers on social media we can help set up a regular Twitter chat about this topic so we can all help each other.