How to Wreck Your Brand in a Single Weekend 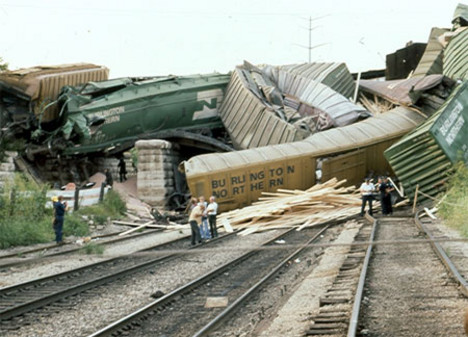 I witnessed a train wreck this weekend. Not a physical one, but an online version involving a social media company, a respected business consultant, an advice video, blog comments and a Twitter battle that led to harassment via direct messages and support tickets being filed.

I don’t want to call out the particular players in this incident and add fuel to the fire, but I do want to talk about this because the whole thing was completely avoidable.

A video and graphic formula was posted on a niche site that focuses on selling social media and online packages to a particular audience, on the subject of social media ROI. It was the opinion of some folks I know, that it was not accurate or sound in its theories. (I agreed with their opinions.) Blog comments were posted Saturday night, opposing the theories and asking hard questions about the formula and claims being made.

MISTAKE 1: The site owner removed the harshest comments, which I noticed and mentioned on Twitter. This got our group’s attention as we all tested various browsers to see if the comments were really removed or not. They were.

We can debate whether or not someone should step into another person’s environment and “spoil their soup” so to speak, but I personally think the nature of a blog and commenting system is that it invites conversation… and that conversation may not always want to be what you want to hear. You should let it happen anyway, and respond the best you can, with graciousness. (Excepting obvious troll or spam comments, which are deliberately thoughtless and should be deleted rather than posted to keep the experience of your site positive for readers.) The spotlight is on YOU when someone is calling you (or your company) out, and you are being watched to see how you will respond.

THE OTHER OPTION: The site owner should have responded to the questions and comments on the blog, in an open exchange of ideas. If he did not have enough data points to defend the formula & video (he did not produce them) he should have stated that and deferred to the person who came up with the theory, and let her respond when she was next online. (And not remove the comments.)

MISTAKE 2: The site owner got VERY testy on Twitter with the people who posted negative comments on his blog. When I say testy, I mean loose threats were issued. Dozens of defensive tweets were posted. Some were ultimately deleted. This is NEVER acceptable and can hurt your brand for far longer than you think statements will be remembered. To react in this way leaves an indelible impression.

One reason for the anger was that the site owner felt people were “picking on” his author. I saw the comments and understood where he was coming from, but rather than take it personally and threaten everyone not to mess with his “family” he should have corrected people that were making personal slams (pointed it out to them) and kept feelings about that separate from the questions the business consultant raised about the data presented.

THE OTHER OPTION: The site owner could have responded on Twitter about receiving the comments and stated that he would have the author of the theory respond when she was online, and thanked folks for leaving a comment. This is definitely taking the high-road, especially when you feel attacked, but when you’re focused on protecting the livelihood and reputation of your brand, the high-road is something you should be considering.

MISTAKE 3: Due to peer pressure on Twitter, the site owner displayed the missing comments again, but failed to address them on his blog (and they contained direct questions.)

THE OTHER OPTION: This was a good rectifying step, but the failure to acknowledge that there were questions on hold, waiting for an answer, made folks jump to conclusions. Among them, that they had no good answer to defend their theories, that perhaps the site owner didn’t know how to defend the data, or that perhaps he was just rudely ignoring what he felt were non-important questions. Answering the person who posted them, on the blog, would have led to a conclusion for the time being, at least, until the author showed up to defend her work.

MISTAKE 4: The site owner sent threatening DM’s to the respected business consultant Sunday afternoon, who promptly posted them public on Twitter and asked what the recourse was regarding physical threats and Twitter’s abuse policies.

This is completely and totally unacceptable for any company who wants to do business online. This is not a teen forum of high-school people who are hanging out after school. I guarantee anyone who witnessed this after-effect of the incident from Saturday night, on Sunday, will go out of their way to make sure people don’t do business with this social media company if they can help it. This was extraordinarily damaging.

THE OTHER OPTION: Obviously, (to me) the site owner should have dropped the issue, or followed up with his author to address the questions asked by the business consultant. Sending a direct message to the consultant regarding blog comments being answered would have been a nice touch, to show follow-through and acknowledgment that the questions raised were heard and addressed.

This entire incident bothered me a lot. Not just because some of my friends were involved, though obviously I defend their actions and statements because I feel they were accurate. But this social media company, in an industry that suffers from vagueness to begin with, undefined roles, and more questions than precedence has delivered answers for, completely FAILS to understand the most elemental aspects of how to do business using social media channels. And the people they service, their niche audience, are busy people who are like not overly technical and don’t have a ton of time to set up their personal brand elements and social presence, so they rely on this company to be honest, deliver value, and know what in the world they’re talking about.

If you are in the social media space, espousing theories, sharing ideas, making bold predictions, stating claims… expect debate and non-agreement. If you don’t want it, write a more traditional article and not a blog post with comments. This space is NEW. In some ways, it doesn’t feel like it, because those of us involved with discussion boards and various web applications for years don’t feel social networks are that different than what we’ve dealt with forever. But mass adoption, careers in this space, consulting, advertising and helping clients market themselves on social platforms is fairly new territory. So if you are going to claim you have the answers, prepare to defend them, explain them and talk about them.

From the Motrin Moms outrage to the Pepsi Can Suicide scandal, these trainwrecks keep happening online, often on the weekend when people are “off-duty”, and usually fueled by the source not knowing how to handle and respond to criticism and backlash. Even if you’re a small business, if you have a blog, if you do things “in public” such as post comments on social sites, create videos and invite comments, etc. you are going to need a plan in case things go pear-shaped.

I recommend reading the following two articles by Olivier Blanchard, aka The BrandBuilder, and then coming up with your own customized plan so that when times are tough, and you feel your blood boiling, you can follow the plan and not end up careening your brand over a cliff unnecessarily. It’s easier to prevent problems than fix them… your brand is the “baby on board” that you need to take care of like it’s a precious thing, or risk it being damaged beyond repair faster than you can save it.

Study how to deal with blog or brand criticism: