(REPEAT!) Dear JC Penney: A Logo Change is Not Rebranding

JCP, or JC Penney, or whatever we are supposed to call them this week, has changed their logo again. Sadly, it still looks like something done in Powerpoint. How do they keep doing this???? Behold…

The logo links to an article about it with a video they’ve also done to promote this new… rebranding? Attention-getter? Pointless exercise demonstrating another bold lack of creativity by a creative team who ought to know better? What is a red empty box supposed to mean, anyway? (Insert your own lack-0f-creativity and brand soul jokes here.)

This concludes the update of this post – the text below is from the last rebranding less than a year ago. Geeeez. I worked for them as a visual merchandiser, you know? It used to be about selling clothes and linens and things.

JC Penney announced last week, in press releases that they had crowdsourced a logo redesign, are changing it to all lower cap letters inside a little square and debuting it at the Oscars, where they are the sole retail sponsor. My immediate reaction was the thought, “oh lovely, the Gap square is back!” 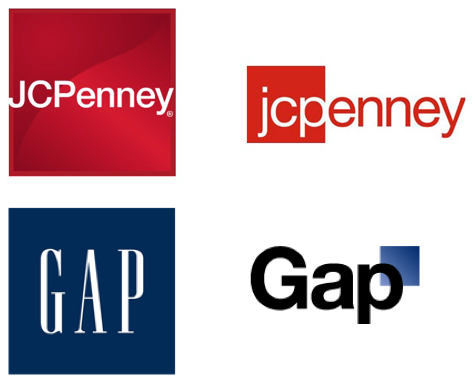 BrandChannel’s opening line about this ground-breaking news is worth repeating:

JCPenney has thrown in with all the other brands suffering sluggish performance in the belief that a logo change will make a difference.

This is the crux of my problem with this logo change, and subsequent press release about it. Changing a logo will never fix a brand’s problems. Are you listening? I will say it louder – memorize this if you work for clients or a company on branding:

Changing a logo will never fix a brand’s problems.

Why on earth major brands, some of whom have been around since the 1800’s or early 1900’s, think they can slap a new logo up and people will magically start coming into their store or restaurant or grocery or whatever again is baffling. It takes so much more to rebrand oneself, and changes have to come from the top down and within, and an entire company has to get aligned around a new spirit, new messaging, new changes in product line or services, etc. Yet, as we have seen repeatedly and with unfortunate hilarity online lately, companies are changing brands like underwear.

One element of ridiculousness in all of this minor hype, is that JC Penney repeatedly referred to themselves as jcpenney in their news release… which does not work to set their name apart as an entity inside paragraphs of text, and just looks plain wrong – like an editor fell down on the job. It also makes it seem like a third-year design student is actually running this rebranding initiative inside the company, as opposed to simply having won branding rights in an upscale crowdsourcing contest – JCP used design schools and ad agencies to do the free concepts for this logo change.

Brand New has a compelling argument against this change: “The biggest problem I have with this whole thing is the perception that this is a “bold new logo”. It’s not. It’s rearranging the chairs on the Titanic, reupholstering them if you want to be generous. But bold or new? No way. Looking at the result… as a type exercise it’s actually very decent, it’s well spaced and nicely positioned, can’t argue with that but it is also a confusing visual and verbal nomenclature.” Please read the whole article – it targets many of the problems with this logo change.

I will add to that, it’s a box. And Target owns red and white, minimalistic type, bold TV advertising – are they willing to risk being confused with a discount retailer???

Despite JCP’s “red gift box” at Christmas and the “it’s all inside” campaign, the box has negative connotations for me. JC Penney is inside a box of their own making, and has been, for a long, long time. I worked for JCP in my early 20’s as a visual merchandiser (which is why I call them JCP, not because of the new logo – it’s a shortcut I am used to using.) I have wrapped thousands upon thousands of those boxes… not my favorite thing to do as a window dresser! I will forever associate them with blue more than red – maybe that was the prevailing color when I worked there. I ran the risk of becoming a “lifetime employee” when they offered to train me to be a visual merchandising manager, something I thought I wanted at the time. But I looked around and realized that if I did that I might never leave the company. So I quit my job, became a waitress and went back to college, still in search of what I wanted to be when I grew up. It wasn’t until I became a Marketing Director at Whole Foods Market and used a Mac in my daily chores that a plan began to form. To this day, when I go into a JC Penney store, it feels exceedingly familiar – it feels like home. Because there have been no great shifts in their merchandise, no strides forward in the world of merchandising, no great shakeups in the brands they sell or the types of items they carry… all of which would signify an actual and genuine rebranding!

To contrast this grand announcement via press release of a logo change that so many companies are doing in a desperate plea for attention, I think of Apple. Apple has changed their logo several times over the past years since Steve Jobs returned to the company. But a new logo has NEVER been the primary driver for announcements – it’s been a smaller, perfectionist detail of major, never-before-done innovation in the product line. When Apple refines the logo, it’s because they actually have ALREADY changed the brand! Their changes come to the public from the inside out – they create amazing products in R&D, refine them in the manufacturing process, test them to death for quality, and then release them, often with accompanying changes to packaging or logos or advertising. But the brand evolution is around what Apple is actually tangibly selling, NOT what a logo looks like on signs, bags or storefront.

JC Penney is guilty of a software industry mantra that I’ve often mentioned: “leave no customer behind.” They want to be seen as youthful, hip and modern. But their customers are people like my deceased mother-in-law, who often purchased from their catalog, and who used to work for them years ago when they were here in Garnett, a town of 3500 people. Rural women and families in small-to-midsized towns are who JCP should have kept finding ways to serve, despite economic hardships in these towns and less spending. Closing catalog storefronts was one hindrance to good customer service, but the recent change to cancel all print catalogs could very well hurt them more than help them. For people who aren’t near a larger city where there is a store, and who don’t shop on the internet, they’ve now killed a customer from their database… many of them loyal, long-time customers. And why? To attempt to attract younger people who frankly want hipper, cooler merchandise than JC Penney carries? By brands and designers not in stock in their stores?? Rather than kill all print catalogs and do “Look Books” that force people to buy online, they could have done a purge and possibly saved some customers or at least not alienated them. I would have sent out a postcard saying if you still wanted to receive a print catalog, they had to send it back with an opt-in address (giving people a chance to blow it off, or to make sure they had an updated address.) That would have saved print costs, and if they tied the catalog products to the existing online store inventory it’s just a matter of designing and printing what is online anyway – but making it available to those who are still living and spending, but not doing it online because they don’t want to. Offering people a look book with no pricing or helpful info is an extravagant, wasteful expenditure – I get them all the time, look at the pretty pictures once, and toss into the trash. From the MultiChannel Merchant article, “JC Penney admitted that ceasing the big catalog book hurt total sales more than they expected it would in the second quarter of 2010.” I’m surprised they were surprised! They should frankly be more savvy than this, after years upon years in the retail business.

As people get involved with technology, they become superior to those who don’t use it as much but that is so short-sighted. A loyal customer should never be left behind unless you absolutely can’t help it. I fear that this logo change won’t help at all, and the cancellation of services that helped JC Penney grow as large as they have will continue to hurt, and what we are looking at is yet another retailer on a downward slope to inevitable closure. I hope they will do more than just focus on slapping the logo up everywhere and make some other changes that will save the company from being yet another vacated storefront in semi-empty malls.

Some great articles on this subject: