I’m a bit befuddled but wanted to share some mysterious features that just showed up on my Twitter.com screen.

The first is TLists – a similar feature to Listorious, TList appeared on my page to show others the lists I am on. I had nothing to do with getting on these, and not sure what the criteria is exactly for being on these lists. One of them said that I was one of the most listed tweeters about social media. The main site is http://www.tlists.com. The feature looks like this: 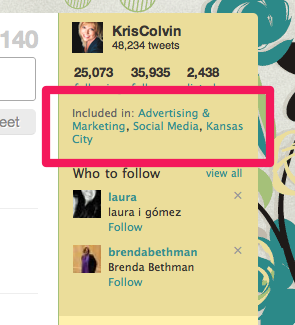 The second feature is a straight-up knockoff of one of Mr. Tweet’s most helpful features. If you see the picture below, it shows me who of my friends is ALSO following this user, so that I might make the decision more easily about following him myself. I see now why Mr. Tweet shut down and will be releasing another product soon.

What do you think of these new features? I’m wondering what else they’ve got cooked up that we don’t know about!

UPDATE: My friend @yoni just found another feature that I don’t have: