The best PR is often incidental

A lot of our site visitors know about my love and admiration for CJ Sapong, rookie forward for Sporting Kansas City. I call him my #lilrookie on Twitter and love to make threats against those who threaten to injure him or even give him a bad time during a game. He did something completely unique and unexpected yesterday – with the women’s national team in town to play a game at LIVESTRONG Sporting Park, he decided to serenade Hope Solo, goalkeeper with a rap-style poem he had penned the night before. Watch the video and then let’s discuss the outcome…

You will see folks with cameras and video recorders there – there are always photographers at training sessions at Swope Park, where the team trains, so when one of our guys comes onto the field with a mission, headed toward a member of the women’s team, it’s going to get the attention of the area photogs and reporters. Plus someone may have had to arrange for Hope to hang around and meet him. Some of the guys on the right, Kevin Ellis, Michael Harrington, Korede Aiyegbusi, and Jon Kempin, are teammates of CJ’s so they’re snapping phone pics while he sings of his love for Miss Solo.

Now, CJ gets some press in his own right, for his soccer-playing skills. He was recently named #15 out of 24 players under the age of 24 in all of MLS. He is likely a candidate for MLS Rookie of the Year, which I am personally hoping he’ll have earned when the season is over. But yesterday’s serenade resulted in wide press coverage, within hours, for many reasons:

You just can’t buy or manufacture this kind of PR. I mean, a lot of people try, but it comes off as staged or processed or inauthentic (like those wretched non-real “reality” tv shows.) What’s interesting is in the aftermath, it’s been covered by (to name a few):

YouTube statistics as of this morning show over 100,500 views – since yesterday afternoon. It’s the #42 most discussed, #5 favorited and #23 top rated video in the sports category as of this writing.

I teased his publicist last night, Ari Washington of Double Coverage PR, who knew he was thinking about doing something but didn’t know if he would actually go through with it, about all the awesome coverage this is getting. I would imagine this is a publicist’s dream, but still… if they had planned this together and it didn’t come from CJ’s brain, personality and genuine interest, I doubt it would have been as well-received or as interesting.

So how do we take any lessons from this for our businesses? I’m not quite sure. One thing I have observed is that many people prefer a loosened up approach. I talk a lot about various client activities or things we are doing, but when I am genuinely enthusiastic about it people don’t seem to mind, but if I promoted our activities like a lot of companies do I think the messages would just fall flat and be ignored. I ignore most obvious marketing messages myself… they’re boring.

I think a lot of promotions, especially in the social media space, are contrived and so they feel contrived. They aren’t as likely to be shared or talked about if they are so obvious. That is really hard to get around – marketing is about putting awareness on something so that people might consider it for themselves, so campaigns are part of the reach/awareness factor. But this is why I SO want businesses to fully embrace socializing their business so that all employees are welcome to use social media in and out of the course of doing business, talking about their daily activities naturally with indirect self/company promotion. What CJ did here (whether he knew or not beforehand) was indirectly market himself. A lot of people who don’t know who he is, might be curious after seeing this video and take a course of action to find out more. They might follow him on Twitter, look for him on Facebook, look him up at the Sporting Kansas City site, Google him to see who he is, and read and learn about him when they knew nothing about him previously. He is on their radar now, and they will recognize the name when they hear it. 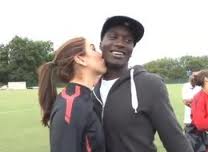 So the moral of this story I guess is, you’ve got to be out there doing something, if you need awareness and reach. Hopefully what you’re doing is interesting and unique or memorable. Because push, push, pushing your marketing is not going to win the day, though it may be semi-effective. Show your delightful personalities (for people and brands), with all the quirks and flaws. That has long been my motto and continues to be for both myself, and for Fresh ID. We are a small, but growing business and far from perfect. But if we tell you we’re interested in helping your business grow, and here are the problems we see, and here are some ideas, we mean what we’re saying, be it right or wrong. We try things and discard them if they fail, and try something else. When we say something about a client in public, we mean it, we don’t fake babble just to score points or try to get people to do something. We would lose interest, not gain it, if we did, and I think people would know we were being fake.

Good luck with your own promotion and PR efforts – it’s a jungle out there! When something fascinating and different like “the rookie serenading the rockstar goalie” comes along, it grabs our attention. Here’s hoping we all are so lucky someday to borrow a few minutes of the public awareness (if needed.) Have a great weekend!