Today I witnessed something really annoying. I mean, it got under my skin particularly. My friend Scott Stratten, @unmarketing, posted on Facebook that it was pathetic that there were 10 Verified (by Twitter) accounts, all spamming people who were talking about the Superbowl:

You can try looking at the accounts, but within a few hours and lot of griping online about it by some of us, they seem to be unverified (no more logo next to the name) and they are now protected so you can’t see the tweets they’ve been sending. Note: protected, not taken offline, which is standard Twitter protocol in response to enough spam/block reports.

I believe these accounts and the verification were paid for and Twitter was aware of the campaign in advance. Why? Check this tweet out: 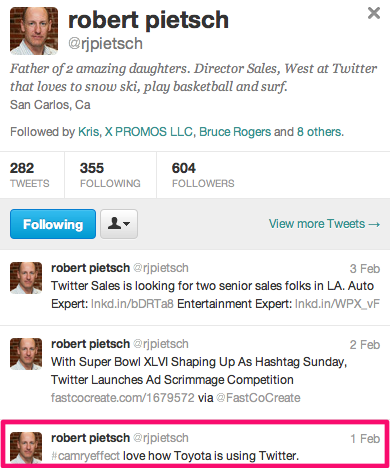 That’s one of the Directors of Sales for Twitter, praising how CamryEffect was going to be using Twitter, and then they had 10 accounts sending non-stop spam messages to people who mentioned Superbowl-related keywords (from what I could tell by clicking on lots of their tweets before they closed their accounts off.

So what’s the big fuss, anyway, you may be asking? I’ve had several conversations about this today. There is a fundamental difference in advertising, and partaking in events that result in ad delivery, such as a Google search, watching TV, going to a movie, using a free platform, listening to the radio or reading a magazine, vs. SPAM, which is a direct and personal solicitation to you, using an account of some type that you have (your phone, your social network account, your email.) There is also the concept of “cold” solicitation, which hovers somewhere between the two. If I say I need a dry cleaner (for example) and someone who doesn’t know me – a person, or a dry cleaner – says “Hey, we do that, if you want to check us out we are here” that is a little more appealing to me personally than spam, which is often the result of an automated delivery, and therefore impersonal and meaningless.

What Toyota’s CamryEffect campaign was doing was pure and total Twitter spam. Someone set up bots (someone on Facebook said this was done using http://localresponse.com/#brand which delivers advertising real-time. Their ad agency Saatchi & Saatchi LA has been tweeting repeatedly to watch the ad they created for the campaign, so we might assume they had something to do with this Twitter campaign also though we don’t know. There was a press release about an integrated marketing campaign using something called Shazam. So really, multiple culpable players were involved, at least Toyota who approved it, Twitter who helped enable it by making accounts look Verified and Official, and (maybe??) an ad and/or social media agency who boneheadly decided that what Superbowl football fans REALLY wanted tomorrow is a big old can of SPAM, otherwise known as the CamryEffect.

I feel sorry for the car. It really had nothing to do with this short-sighted money-grab and textbook worthy negative social media case study. And, as always, my concern is for the end users. One tweet about a car today, because you mention watching an event on Twitter, could well be 50 unwanted tweets about everything from zit cream to male impotence products based on watching The Mentalist. Or whatever it is you watch and people think you will buy.

And THAT is the single thing that really could be the death of Twitter. People will stay for ads, they’ll stay if you charge them… but if you suck them in and then sign them up against their wishes for canned SPAM, they’ll go elsewhere.

This didn’t happen when Ev and Biz were running the show. I knew something bad was going to happen when they left. If you care about this stuff, don’t just tweet or Facebook it. Put it in a blog post. Send it to Twitter. Say you don’t mind promotion but you expect them to promote responsibly. Yes, the site is free, but you create the content that keeps this crazy rat wheel turning. Don’t sell yourselves short as the end user. You DO matter! And maybe the Camry is even a good car, I have no idea. Ask your friends if they have one and if they’d recommend it. That’s a good way to find out.

Wake up companies and agencies. This is NOT your oyster. Our accounts are not your free-for-all. You’ll get it eventually because if you keep acting like this, you’ll have to come up with yet more ways to do push marketing because we’ll abandon in droves the sites where you abuse us.

Update 2/5:
As I published this last night, Toyota went and apologized on a blog post at TNW:
http://thenextweb.com/socialmedia/2012/02/04/toyota-takes-to-spamming-twitter-for-camry-super-bowl-promotion

We will be discussing this at the next #smbydesign chat, which is held every Thursday. Check out the times and information and please join us to talk about whether or not you think campaigns like this are a wave of the future we have to accept or we will be able to use our voices to stop Twitter and brands from heading down a wrong path by publicizing their mistakes.

Some great insights on WHY this brilliant scheme may have been cooked up are at Marketing Handy, so read that quick post if you have a minute. I’d love to have him talk to our #smbydesign group about the “viral video” conundrum marketers have when they want to make video but for the specific purpose of having it “be viral.”